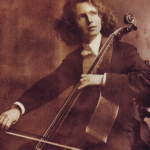 My exploration of English music has inevitably led me to a number of composers with New Zealand roots who settled in London or spent long periods here. I have been greatly helped in this area by New Zealand pianist Kathryn Mosley, who now lives in London. Together we have been slowly uncovering this repertoire, which is often extremely difficult to locate. We were delighted to give the British and French premieres of the Sonata no. 2 by Arnold Trowell (1887–1966) in 2014, and earlier this year we gave the first modern performance, possibly even the premiere, of the Sonata movement of 1891 by Alfred Hill (1869–1960), written while the composer was studying in Leipzig. Kathryn and I have also now had the pleasure of meeting Trowell’s son and grandson, who – it turns out – live very near us!

The works we have discovered cover the whole gamut of expectations, some completely within the Western European classical tradition, others drawing inspiration from Maori themes, including Hugo Anson’s Nga Patu-paiarehe (‘Children of the Mist’). Kathryn and I are now working towards a disc that will showcase more than a century of New Zealand repertoire for cello and piano.